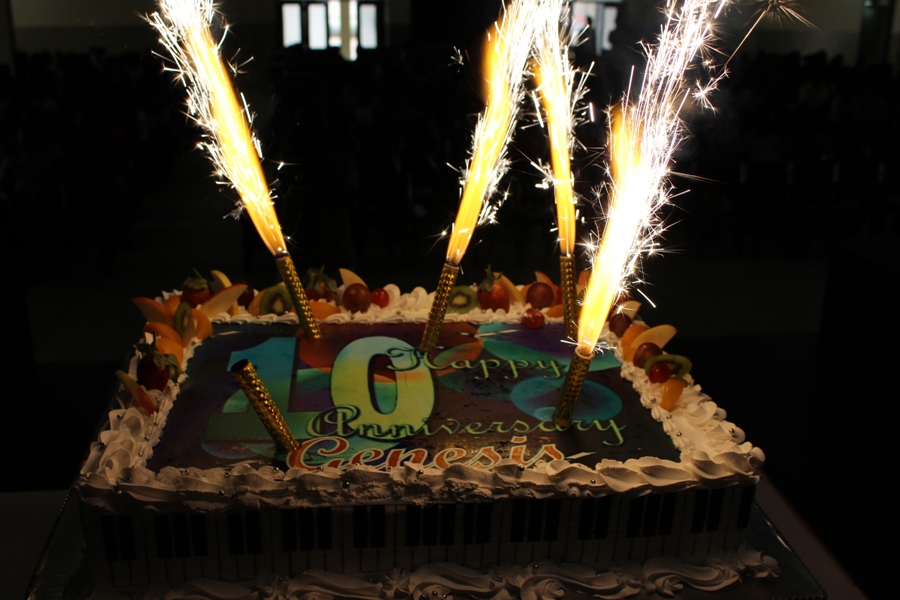 Last Sunday, 15th January 2017, was a special day for members of Tema International School’s Genesis Ministry as a special church service was held in the school’s Multi-Purpose Hall to commemorate their 10th anniversary. The service was attended by some of the founding members of the group, alumni, staff, and students as well members of the senior management team of the school. A significant aspect of the service was an exhortation by the guest preacher, Nii Okai Okai, founder of the Habour City Mass Choir. He congratulated members on the occasion of their 10th anniversary and shared from 1 Chronicles 22: 11-19 seven key principles that will move the ministry as well as their personal lives from “good to great.”

Later on, Mr Isaac Darko, the founding patron, together with Mrs Apiokor Abbey and Dr Elsie Tetteh shared with the congregation memories of “How it all Began”. In addition, Juku Attionu of Grade 10 also shared a testimony of how his life has been impacted by his involvement in Genesis. Finally, the General Manager of the school with the assistance of Mrs. Okai led Genesis members to cut the anniversary cake to climax the occasion. Genesis is particularly grateful to the school management for providing support and guidance over the years. The current president of the group, Ms. Jacqueline Tetteh who as the co-liturgist for the service shared as part of her welcome an update on the evolvement of Genesis which has been published below.

“All Genesis members should please get to the mph after siesta”. I always wore a frown after hearing this announcement. Why? Because I didn’t have the courage to get myself there. I was so interested in this group that it hurt me so much knowing I couldn’t be a part of them. No one told me I couldn’t do it. No one told me I wasn’t welcomed but I felt as though I would not be able to make the sacrifices they all made and be good enough to be there. It took time and courage for me to finally take that bold step and to surrender myself to be used as a vessel to minister to God’s people. It was then that I realized that all those who stood on stage every Sunday were bold.

Ten years ago an English teacher recognized the lack of singers during Sunday service and decided to come together with a few others to fill that vacuum. This was the Genesis of our odyssey and a decade on, our legacy continues to grow from strength to strength.

I saw it coming so I prayed against it. I tried as much as possible to convince myself that Genesis president was not my portion but here I was being introduced as the Genesis president. It was then that I realized that everything was about to get real. I was scared about what you were going to say. How you were going to respond to my actions and how I was going to carry myself around but then I decided to find myself and in doing this I realized I wasn’t alone. God had given me a family outside home to help me go through this and until this day, I am grateful for Genesis.

Now the bell goes immediately after siesta and the presence of all Genesis members is requested in the MPH. I try to ignore the bell but then I ask myself why I joined this group and I realize that I was in search for Christ, desired to serve God and surrendered myself to be used in his kingdom. I wake up now with a smile ready to walk into the MPH even though the instrumentalist are going to blast me for changing keys, tenor squad is feeling too cool or we have all decided to make a huge circle and have good fun and to hold hands and pray together and even pray for the people we love. This is my family.

Thank you Mr. Isaac Darko (Our founding patron) and his team for making Genesis possible. Thank you TIS Founding family for your support and to all the past members and presidents of Genesis, we would like to say a big thank you for keeping the group alive.

It comprises of 55 members. Headed by David Quampah our music director, Nubuke Amoah our vice president and I Jacqueline Tetteh, the president.