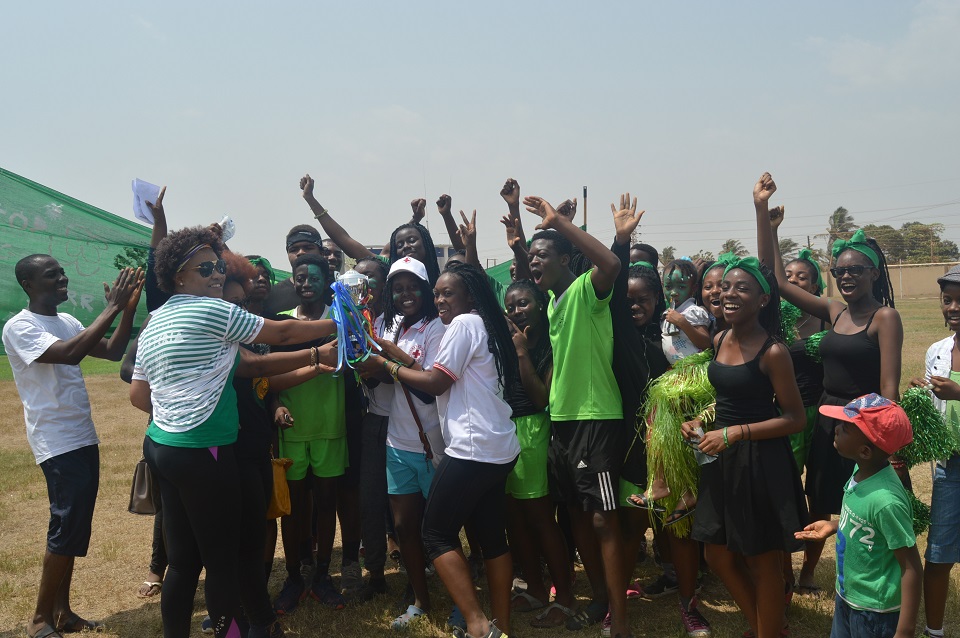 3….2….1….GO! And off they sprint with the speed of lightning, leaving a tornado of sand behind them as they go. One would think these athletes were teenagers in their prime, but the sprinters turn to reveal faces of adults: parents.

This was on the 20 February, 2016. Location – the Sports Complex at Tema International School. All had gathered to witness the event to which many had looked forward. The day when family mattered the most: Sporty Family.

Students arrived at the sports complex in their multitudes, dressed in the attires of their respective colour groups. From an aerial view, it would have looked like a rainbow on Earth against the clear blue Saturday sky. Indeed, it was the perfect setting for the amazing event that was sure to follow.

The day got off to a slow start, beginning with aerobics, featuring the entire school, as well as the families that were present. “Up! Down! Up! Down!” the instructors commanded, and everyone followed suit. However, at a point, people could not follow the rhythm and developed their own series of “up, downs”, but this did not matter, as it all contributed to the fun of Sporty Family.

This lighthearted atmosphere, however, soon became tense and saturated with suspense as the next sport on the list was announced: karate. The karate session began with an introduction of the karate participants consisting of people with varying abilities, from the black belters right down to the beginners. After the introductions were made, the participants were put to the test of breaking boards with various parts of their bodies – their fists, their elbows, their feet and what shocked everyone the most…their heads. Yes, their heads. Thankfully, all participants made it through with their craniums intact. In fact, what got the crowd most excited was the fact that the entire Sakyi-Addo family featured in the karate session and just as expected, each board that was broken by the youngest Sakyi-Addo was followed by a resounding “AWWWWWWWW!” (Response from the little girl: confusion)

With everyone in high spirits after such an action-packed event, the Inter-colour Atheltics Competition began, debuting with performances from each colour’s cheerleading squad and a speech by Mr. Kweku Sakyi-Addo. The races then followed. There were several relay races in which parents, students AND teachers collaborated. Alistair Kirk’s mother, in particular, was one of the highlights of the event, as she easily won her race, leaving her competitors a good 20 metres behind her.

Slotted within the athletic events were more informal “sports”, like tug-of-war as well as an eating competition. Although the tug-of-war was quite intense, as it appeared each colour was equally matched in strength, it was the eating competition that became the topic of conversation that afternoon. Everyone thought the eating competition would drag because of the unbelievable amount of food each colour had to consume. However, Yellow had a soon-to-be-discovered weapon. At the word go, this student guardian began to devour the watermelon slices, about 6 at a go, quickly diminishing the pile of watermelons. In record time, he finished the heap of watermelons and moved on to the bread buns, whilst some students were turning green from finishing their second bread bun. Naturally with their secret weapon, Yellow emerged victorious from the eating competition, praising the guardian for his efforts.

But let’s not forget the food that was sold at Sporty Family. Sizzlers was the main food vendor and offered a varied menu which consisted of the extra cheesy pizzas, semi-healthy shawarmas and the extra healthy milkshakes. Our beloved Bra Emma also presented a local twist with his famed charcoal grilled chicken. With such “gourmet dishes” at the students’ disposal, who would want Sporty Family to end?

But unfortunately, after spending the whole day in the scorching sun, it was time to clean up and leave. Parents and other relatives said their goodbyes to the students, giving their goodbye hugs and delivering their ‘we love you’ with loving smiles on their faces. This was the last image seen before the curtain closed on TIS’ 2016 Sporty Family.