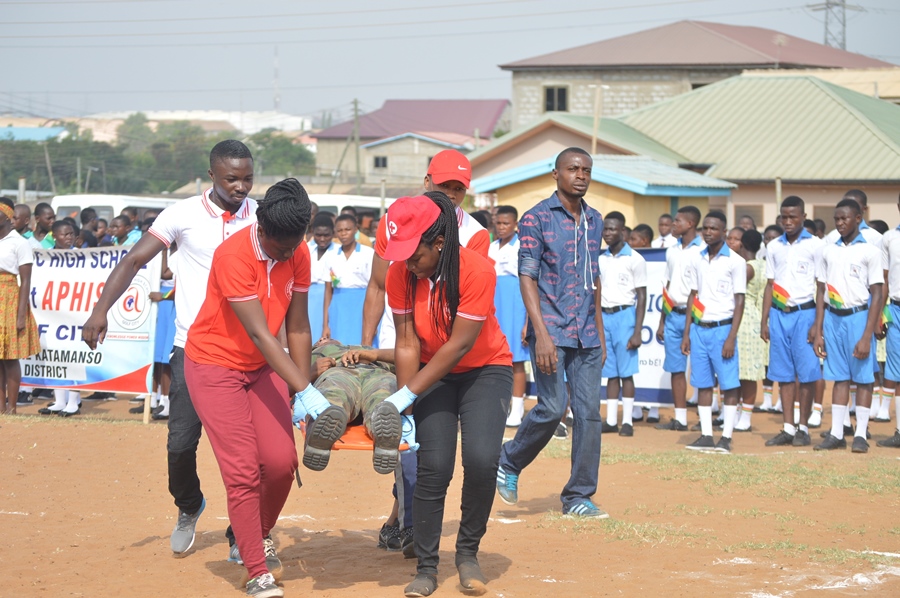 On 6 March 2017, a team consisting of 5 members of the TIS Red Cross Society attended an Independence Day celebration at Kpone, Tema, to act as first aiders in case of any emergencies. This was a very interesting experience for me. Before setting off to Kpone, I did not want to go because I felt like I would just spend all my time walking around in the sun, doing nothing because I felt like no Red Cross treatment would be needed. But not more than 10 minutes after our arrival, we were called to action. Children who had not eaten since morning were made to stand in the scorching sun from 7am to 12pm. Many children collapsed even before 9am and being a small number, this was an arduous task for us. Being the only boy amongst the Red Cross members present, I had to put up a show of strength, carrying several casualties. I, for one, do not understand why the children could not have been given canopies and chairs to sit on and relax until their turn to march. I believe this would have been a better idea instead of putting the lives of the little children at risk. All in all, it was a really eye opening experience and I wish to do more and put the skills I have learnt as a Red Cross member into action when needed. (Kevin Selorm Mensah _ Grade 11)

On the 6 March, five members of the TIS Red Cross visited Kpone to assist the students participating by acting as first aiders in case of an emergency. Only 5 out of more than 20 members were present so at first I felt rather discouraged but through the course of the day I became rather excited to be part of the event. The event itself was not very pleasant as it could have been especially regarding the welfare of the children. The children had been standing at attention for over 4 hours in the heat of the sun while adults and officials lounged under canopies. These conditions therefore heightened the chances of children collapsing. We, the Red Cross, had our hands full attending to the constant influx of dizzy, nauseated and unconscious children. In a nutshell I am grateful for having been a part of the program. Not only have I gained experience, but I have also gained ideas. (Seyilayo Olagbami _ Grade 11) 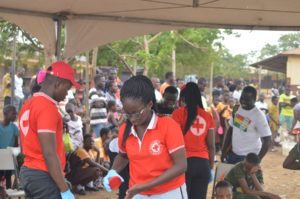 On 6 March, 2017 a team of five Red Cross members made their way to Kpone for the Independence Day celebration. May I say it was a very eye opening experience and not only because we were called to action, but because of the state of the children. Most of them had been standing in the sweltering heat from about 6AM and didn’t begin marching till about 10AM. I found this so appalling because not only did this deteriorate the health of many children there, but it substantially increased the possible number of casualties at the scene. Regardless of the many casualties, we were still able to make a good impact at the event. (Rachel Odartey-Wellington _ Grade 11)

6 March is a day of celebration of our homeland, Ghana, but Red Cross members decided to spend this day looking after participants of the day’s events. I have never seen so many children faint spontaneously. I had the experience of helping cater for the disoriented children at the March parade. It was interesting as a Red Cross member to be there for people at the parade who felt tired or dehydrated because I was able to exhibit my skills on casualties and practice my first aid techniques and procedures. I can confidently say that I can administer first aid to an injured person or a casual as we say in Red Cross. The 6th of March celebration was exciting to watch especially since this is my first time spending it at an official event. I would encourage everyone interested in Red Cross to engage themselves in the society and get the firsthand experience of taking care of people. It was hectic, but still exciting! (Nuna Attipoe _ Grade 11)

Interact Club of TIS and the Incubator Agenda
May 11, 2018
Current Month

Powered by Convert Plus
X