Reflection on how the Akorlikope journey started AKORLI’s village (KOPE) 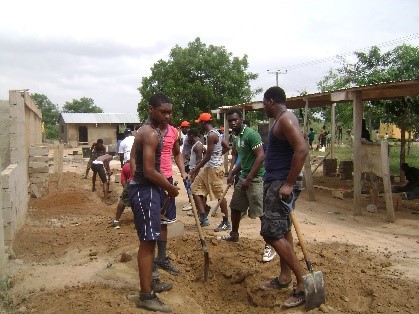 Service is the act of doing something for the benefit of others or for the greater good, defined in the CAS guide as ‘collaborative and reciprocal engagement with the community in response to an authentic need’. With that in mind TIS searched for a community to adopt for its Service experiences. The IB DP Class of 2012 was assigned to find that community.

A number of deprived villages were suggested through collaboration with Center for African Mission. Ambavi, a member of the DP class of 2012 loved the sound of Akorlikope. Mr Tay explained the meaning behind the name: Akorli is the name of the person who settled there first, while Kope means village (Ewe language). The story behind the name alone was enough to sway our students into going for this village, not to mention the fact that it was a deprived community with almost nothing in terms of social amenities and basic necessities, and hence provided more opportunities for them to render services for the benefit of others. Akorlikope was the choice and preparations started towards our first trip. In April, 2011, the yellow buses of TIS started the journey to this unknown village, with no idea of what to expect. However, the excitement and the joy in having such an opportunity to serve was priceless.

As we arrived, we met a vast land, surrounded by small farms, mud houses a nd a water pond which served as a water reservoir to the entire community. The children, the adults and the cattle bathed in it while as the same time, the brown water served as the only source of drinking water for the village. 63 children were learning under a palm tree shed, an improvised school with no tables or chairs started by a missionary called Pastor Steven. With the bare floor as the only seats available for students, toilets and clean water was a distant dream. No electricity, no toys, no uniform or school shoes. Benedicta (Class of 2012) had to ask if we were at the right place: “Mrs. King, I thought we were going to Akorlikope community, and we will be at their school ground, a missionary school. Are we at the right place???” The children were so appreciative and hardworking, the land, beautiful with small plantations of chilli pepper and cassava. The community elders made us feel at home. There was laughter, there was contentment. We found a family, a family th at taught us one of the most important lessons no classroom could teach us; to value and be appreciative of what we have.

Our students found it hard to believe how such a deprived community could exist just an hour and half drive away from the nation’s capital. Pierre, Dodzi, Ambavi, Rita and Eric called an emergency meeting. After 30 minutes, Rita run after us shouting: “We are going to build a school here. We are doing it ourselves. We can’t let this kids down.”

The One Ghana Cedi campaign started. It was phenomenal. The TIS community contributed with such commitment. The idea was to raise money to buy bags of cement and start building the foundation. When our late Co-Founder Mr. Adjavon heard the students’ initiative, he came over to make his contribution and he met the initiators: “Here is my seed money. I am flabbergasted (a word he said when he was extremely happy about something). We are developing caring future leaders. That’s the whole idea. Keep me posted. Mrs. Adjavon’s constant visits and advices took the project to another level.

The dream did not die with the completion of the IB DP class of 2012. Subsequent classes took this up with the same passion and commitment. The AkorliCAS liquid soap was made by students, and was a total sell-out. Students were engaged in different activities to raise money. The best of all was the opportunity to go to Akorlikope twice in a year to work on the project. From making blocks, painting, teaching the women to make soap, teaching the children, cooking, cleaning up; year by year, the project grew. Each class had its own innovative ways of contributing to the project.

It’s been almost 6 years since we stepped in Akorlikope. There are 5 classrooms completed, each filled with furniture. Electricity and clean water have been made available to the community, and the children’s school fees are covered for every term. But we need more: a better toilet facility, more classrooms, a bungalow for teachers, a canteen; and the opportunity to support the school to develop a better teaching and learning approach. The IB DP Class of 2013 sped up the project after their massive fund raise fun fair dubbed #Countdown;

The class of 2014 launched EDUCOM, a group who provided stationeries and school fees for the children. The Class of 2015 initiated Liter of Light, a project which provides the community with solar light made from recycled water bottles. The Class of 2016, with the initiative of Derek Bonsu, made sure the water pump was fixed, raising over GHC 8.000 to repair the pump.

The Class of 2017, with CureAidGhana, started to educate the children on the importance of hand washing. Rinnah Krobo Edusei and Sarah King established an Art therapy project to ensure the children explored art. EDUCOM, led by Nubuke, made sure the school fees were paid on time, while Helping Hands provided food for the children, as well as toys and stationeries.

The class of 2018, inspired by their predecessors, continued a number of projects and started new ones for the betterment of the community, such as: Happy Feet initiative, Dress for Success, Pen in a Box Ghana, Feed a Child program, Sound of Triumph Gospel concert and Evolution: a tale of fragmented sound, our 2016 Annual production. As they plan for their second trip in January a lot of work is going on to make sure they achieve their goal in completing various projects in Akorlikope.

A huge thank you to all Alumni who left their footprints in ‘our Village’, the Akoli’s village, inspiring their juniors. Thank you to our parents and friends of TIS, our dearest Co-Founders, Management, our dedicated teachers, the passionate CAS advisors and staff. To the Akorlikope community, we are grateful for opening your hearts to us, and for continuing to teach us what the classroom didn’t.

As you witness another great production of our Talented Inspiring Students, join us in improving the quality of Graceland Academy and also support the community in developing themselves.

Together we can do more!

Click on the links below to know more about our project.