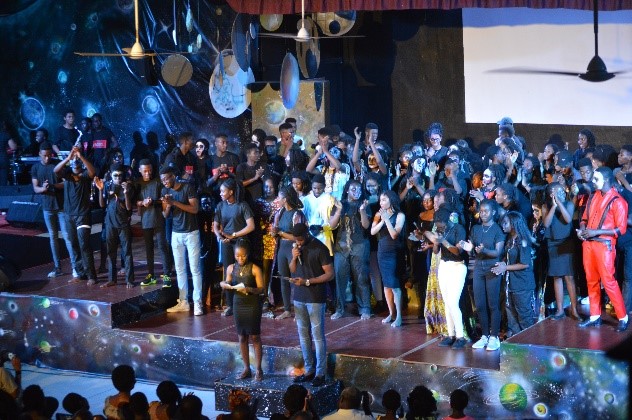 On the 4 September 2016, Tema International School (TIS) embarked on a petrifying journey to produce a play through what was seen by the entire TIS community as an unconventional process. TIS has a thriving play production culture which has gained the admiration of theatre lovers in the country and beyond. Apart from the IGCSE Drama and IBDP Theatre programmes run in the school, TIS has produced over the years sterling annual play productions. In a span of 6 years, 2010 – 2015, the school has produced 6 plays, which include 3 Broadway and Award-Winning Musicals; Joseph and the Amazing Technicolor Dreamcoat in 2011, The Lion King in 2013 and Sarafina in 2015. The other plays include Ama Ata Aidoo’s Dilemma of a Ghost in 2010, Dormitory C: The Inspection by C.S Akyeampong in 2012 and Ben Henshaw’s This is Our Chance in 2014. Play production in TIS is celebrated and as conventional as academic work. On the 30 November 2015, Dr. Anis Haffar, the chair of the school’s Board, remarked on the outstanding performance of Sarafina in his Education Matters column in Ghana’s, The Daily Graphic.

The performance, at the campus, must have caught the audience spellbound through its hour and half duration. I have seen quite a few plays, musicals and concerts, but the Sarafina production by TIS is one of the best theatrical performances I’ve seen. It literally brought tears to my eyes, in terms of the quality rendition, choral music, and the sheer artistry of such young performers. (Haffar, 2015) 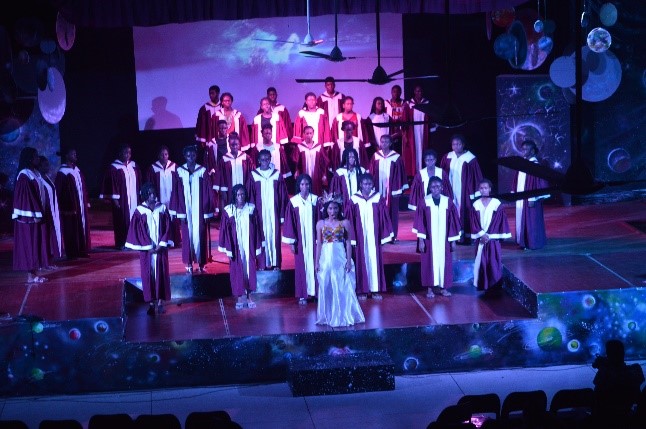 As a convention, all of the annual play productions follow a traditional theatre making process, where a play-script is employed. However, this year’s play production came with a twist. There wasn’t going to be any play-script for the school play. The production team led by Mr. Alfred Elikem Kunutsor, the Head of the Creative Arts Department and drama/theatre teacher, decided that the school would create their own performance based on the concept of the evolution of music. Even though this process, devised theatre, is new to TIS, it isn’t with world theatrical practice. Devised theatre or collaborative theatre allows for the creation of a play without necessarily a script. Just anything can serve as a stimulus for the creation of the play: a piece of music, a poem, a painting, or just a concept. Additionally, devised theatre is highly collaborative in nature and calls for the ‘equal’ involvement of all participants in the play production process. Devised theatre is also process- oriented and very much open-ended. Allison Oddey, a doyen of this kind of theatre practice, defines it as, “a process (finding the ways and means to share an artistic journey together), collaboration, (working with others), multi-vision, (integrating various views, beliefs, life experiences, and attitudes to changing world events), and the creation of an artistic product (Oddey, 2013).

The bottom line: devised theatre is a play production process that is risky, where a group of creative minds embark on a journey with little or no knowledge of the end product.

Failure (not being able to produce a product on the opening night) is as possible as success. And this was what TIS was going to do for the first time.

As an IB school, TIS encourages risk-taking. “Risk is, by nature, scary. It’s uncertain and unpredictable” (Good, 2001). Students are often asked to move out of their comfort zones and “approach uncertainty with forethought and determination; work independently and cooperatively to explore new ideas and innovative strategies, and be resourceful and resilient in the face of challenges and change”. (IB, 2013) Sharon Good highlights some benefits of risk-taking as,

This year’s school play provided a practical platform for not only students, but staff inclusive, to venture into an unknown world, to embark on a journey without a known end, to trust their instincts and that of others, to work closely together with others and very much so, to be afraid. As though this was not scary enough, the production team had a timeline, 6 weeks to produce nothing less of the previous sterling performances, which had 8 weeks of production. This year’s school play was a voyage of risk-taking. The production process began with a question mark. On the day for auditions, a crowd of students thronged to the school’s Sports Complex, without any idea of what they were going to do. A number of them came with one question; what is the title of the play? And to this they were jokingly told Snake in the Monkey’s Shadow. But there was no play or play title at the beginning of the production process, and students were to be auditioned for unknown, better still, yet to be created characters. For traditional play productions that employ a play script, interested participants are often required to have some foreknowledge of the play and more so the character they look forward to be. But the instance where there is no play-script, the students had to be ready for any and everything. Students had to be open-minded and expect just anything that will be thrown at them during the auditions. If this isn’t risky, to prepare for the unknown, what else could risky? The risk with this kind of process isn’t even much with the students to be auditioned, but the staff who have to coordinate the auditions. How do they go about the auditions? What do they look out for in the students? Who makes it into the cast list? etc… These questions lingered on the minds of both students and staff, and there were but few answers. Who were we going to choose? Musical Lunatics? Dance Pros? Or exaggerated, melodramatic James Bonds? The atmosphere was tense, after all, not every student was well-rounded so what criteria were we going to judge? We concluded on a very general list comprising of both those nonexistent to the dramatic conventions and the musical halls.

The rehearsal process as expected was chaotic. With no script to start with, where do we start from? All we had was a concept that was as abstract as the wind, the evolution of music. Students were tasked to write poems, monologues, short stories, and suggest songs with their understanding of the concept. However, from a general concept, the students were able to present a new idea to us and had evolved each stage of the concept to a further level.

An extensive process soon ensued. The students had come up with various ideas steered from a general idea. They were able to come up with valid conclusions and with the aim of devised theatre we came up with The Expression of Music. What we acknowledged, however, was that we transcribed different varieties and eras to bring about a product. It was then decided that we should center on the evolution of music. The school year was already interwoven with various activities that required our time and effort and with an impending six weeks we concluded that it was going to be a catastrophe! Our first signs of hope dwindled when he heard the cacophony within the choir. One aspect was out already. Our task was hindered with the embedded attitudes of others. Their disagreements were a strong odorant to ward off others. 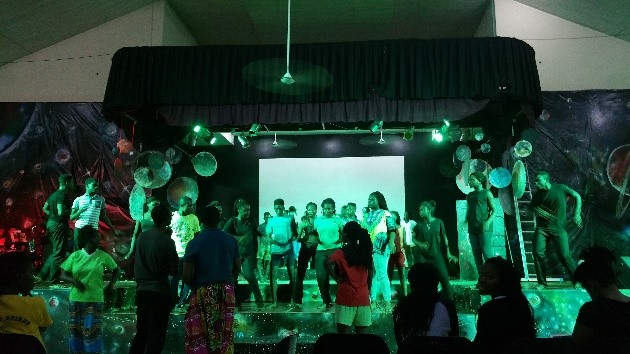 The Diploma and Middle Year Programmes have embedded in their core curriculum for individuals to be open-minded and critical thinkers, but with a false start, the managerial team was disappointed. The structured support of the directors gave us some hope. We were able to butt our heads together, but we were from our ambitions. Our ambitions we didn’t know of. Frenzy sparked those who had watched our amazing Sarafina Production who were anxious and waiting for our production. Malediction came and surrounded the atmosphere with disappointment. No one wanted to come to a play they had no idea about. Our rehearsals turned into a cascade of no results and it seemed the play was not going to come on. Time came with its headache and within 2 weeks we had not connected any of our ideas to the play. In our bid to express ourselves, we varied different themes of the play. We were going to follow Jadyn our main character as she travelled in her odyssey. Time travel was key and we saw the development of many historic images underlying in the scenes. The social intones were key as we saw depression amongst prostitution and slavery. However, we needed to link these together. Music was our link. With the help of the choir we turned disoriented sounds into beautiful symphonies.

The Acting Directors were able to diversify the narrators and to make a close dialogue between them. We saw Fikunayomi develop into a hideous demon by evoking a slave bound to oppression. There were still elements we lacked; our dancing was unsynchronized. 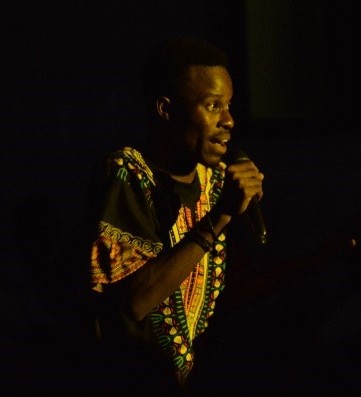 Nevertheless, we decided to move on strategically. We saw the single David Quampah manage the choir. It was a tedious process getting members present, but with dedication and passion the choir moved on. As they advanced, the rehearsed Bohemian Rhapsody sounded more like the recorded song. The dancers moved into showing dance as a true art form and amidst our lack of synchronization we saw the development of Thriller from a recital to an actual ordeal. Who could forget the pouncing Effect of the African Lion in the heart of Serenade in G.? We were able to inculcate our culture and show our different interpretations of life. “May the toads, rats and beetles lie upon you” held the crowds unto their seats. On opening night, it was quickly assigned as the detailed investigation into contemporary art. The crowd watched the spectacle. The coloured moons gave a cool ambiance with the orange imbued lights. Lovers of football, history fanatics marveled at what the school brought. How could a fall turn into such a graceful dance move? Had we brought Broadway to Ghana. Oh yes! The crowd marvelled at our expression. We were able to condense such important issues into a condensed play that served as entertainment. Who could have thought the brevity of time would lead to excess demand for a second show at the national theatre.

All our hard work had transcribed to a powerful piece. A piece many want to see evolve in our next production. Risk-taking was a significant tool in aiding our success. After all, failure is the condiment that gives success its flavor. We turned an idea into something so beautiful with many theatrical elements embedded in it. A dream gradually became a reality due to our critical thinking and risk-taking to evolve into a beautiful creation.